…I just drop everything into the same-size brown cardboard boxes that have a color patch on the side for the month of the year. I really hate nostalgia, though, so deep down I hope they all get lost and I never have to look at them again. That’s another conflict. I want to throw things right out of the window as they’re handed to me, but instead I say thank you and drop them into the box-of-the-month. But my other outlook is that I really do want to save things so they can be used again someday. (Andy Warhol, The Philosophy of Andy Warhol)

It’s difficult to know where to begin, so I start by drawing a small scale map of Adam Milner’s newly-opened exhibition, Desirable Objects and the exhibition boxed within that exhibition, Cabinet. I find this fact funny after finishing a chapter of Susan Stewart’s On Longing called ‘Objects of Desire’ where she writes that ‘the memory of the body is replaced by the memory of the object’ because I realise that I am turning this experience into a thing, my own object. As sometimes performance artist and curator, Milner has crafted this room to resist immediate transformation into dull memory. The exhibition is textured, turns over and, like a restless sleeper, does not retire.

In his ‘Thoughts on bodies’, Milner writes that bodies are ‘porous things’ and, in so doing, suggests an exchange: the only evidence of physical return being a copy of two different press releases, alarmingly distinct, and the blue text of ‘Thoughts’ printed on brass coloured paper. My map, on the other hand, is covered with arrows and descriptions such as eyelashes, bricks, suits hanging, paper, blood, sheets like items on an unconventional shopping list or a catalogue for a maniacal hardware store.

In the winter of 2016, Milner put his objects, some of them currently on display at the David B Smith gallery in Denver, next to the contents of Andy Warhol’s Time Capsules at the Warhol museum in Pittsburgh. Earlier, in 1974, Warhol began to periodically purge his apartment of belongings by depositing things into cardboard boxes, relinquishing all responsibility – the obligation to store, arrange or put away – and formed a large-scale advent calendar of artwork, gradually revealed by archivists and adoring fans much later. It’s a calendar in the sense that Warhol’s things convert public history, leaflets, newspaper articles, condoms, into what Susan Stewart calls ‘private time’, but without the privacy. His love of buying new things and distaste for nostalgia motivated him to shut these things away, delaying any outcome of an internal debate about their usefulness. We should all be living in ‘one big empty space’, he wrote in The Philosophy of Andy Warhol. He sealed intimate photographs, greeting cards and a can of soup inside identical cardboard boxes with a ‘color patch on the side for the month of the year’ as though placarding walls for a tiny paper museum. This process simultaneously transformed his empty apartment into the familiar contemporary art gallery setting, a white cube, where he could proclaim himself and his life as the artwork.

In Remains (2016) Milner was thinking about pores again but, more specifically, where bodies begin and end. His personal items interact with Warhol’s in a way that produces the outline of a person. The collection contains doubles of things (two feet, two teeth and two different braids or strands of hair) that provide a point of contact and comparison where Milner can see the artists’s similarities and differences, and is forced to acknowledge some sort of agency. The objects are never integrated, instead they are intensely separate. It seems that the Warhol museum was, quite rightly, concerned about preserving Warhol’s weird, for lack of a better term, stuff. Rather than suggesting points of contact or comparisons, attention is focused on the act of collecting and preserving stuff in a box: how and why we collect things rather than what it is we choose to keep.

These personal souvenirs, Milner calls them ‘moments of intimacy’, are pieces of a patchwork quilt that tell a story. That story is, Stewart again, a ‘transformation of status’: as small as chopping off the ends of toenails or gigantic as receiving an invite to your first major art opening. As Stewart reminds us, these things are rarely kept out of lineage: like a time lapse, or an advent calendar, they make sense, not necessarily as a sequence but, as a collective body of images, shapes, objects and more. Warhol put his things in cardboard boxes, noting the special relevance that packaging had in his life and work; think: Brillo boxes, cans, bottles, banana skins at a push. His secret wish to accidentally lose or misplace theses things reveals how he thought of these dense little packages as small graves. The philosopher Alan Watts called museums ‘places where art goes to die’ so, in a way, Warhol was further accrediting these boxes as miniature art institutions.

By emptying them, Milner and the Warhol museum, both literally and metaphorically, disrupted their curated decomposition. Remains put the living with the dead, the Andy with the Adam, and placed emphasis on the fascinating activity of making and collecting art. The installation turned Warhol’s things into a composite body mixed, but not mingled, with Milner’s objects. Milner writes ‘the aura of Warhol hangs over the collective bodies’ thus displacing the artist as his objects were re-purposed to form a new artwork called Remains.

The show at the Warhol paved the way for Desirable Objects in Denver where Milner celebrates freedom of contact. Whereas Remains had proved limiting (there is only so much you can do with a box of old bones belonging to somebody so famous), this show celebrates fusion and contamination. The artist’s blood, along with his partner Fred’s, is used to dye sheets and suits (things that you live, love and work in); exuviae is caught in parchment paper and trapped in framed glass. Warhol wanted to throw things away, literally out of the window, in order to buy or make something new but Milner keeps, holds on and ‘cling[s]’ to these outer layers, re-purposing once more.

Duplicates in this show are of the same moment in time, both belonging to and chosen by Milner. There is no fear of corruption or breakage. Fragments of Milner’s body are ‘trapped’ within the creases of his friend Jenn’s amputated braid, and he assures us about an invisible connection, ‘Fred and I have integrated’, that surpasses the physical fusion of two bodies.

More than this: the exhibition is a double, or one of two unequal halves. Cabinet is a Russian doll within a Russian doll. The solo show acts a physical skin for the small room that admits only three people at any one time and contains over one hundred works by ninety-nine artists. This is Milner’s cardboard box, ‘a space for things’, but with a different purpose from that of the Time Capsules. Unlike Warhol, who refused to put things away or even own a cupboard, Milner carefully places things – spaced evenly, and never touching – so as to create a Cabinet that harks upon the traditional hallmark of wonder and status, but also touches on the meaning of the word in relation to governance. Milner suggests their co-existence is ‘complicated’, as any living situation inevitably is, but that these objects are animate as they change or reconfigure with the viewer as they move around and change view. The objects are a collection of bodies, small souvenirs in the sense that they are emblematic of the artists’s larger repertoires, and together they form a loud meeting or committee where everyone takes a turn to speak.

I noticed an interaction elsewhere. The room’s placement, its separate and distinctly formatted press release, amplified the inversion of Desirable Objects. Whereas the outside room was filled with tired things, used false eyelashes, an empty snakeskin, flattened petals, Cabinet was saturated with craftsmanship and a smell of fresh paint. Milner’s interest is with catching things and storing them like an avid archivist, so it makes sense that these shelves were so pristine and organised, almost clinical. A cabinet is for storing things but also for display, showing the skill of each artist in minutiae, another memory quilt. 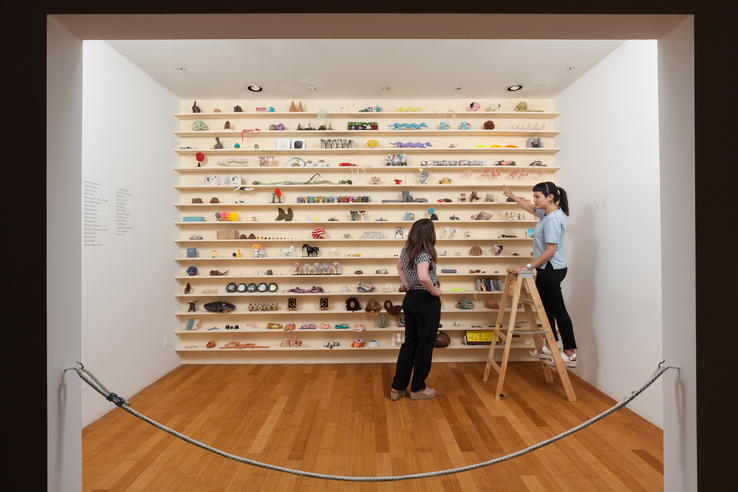 Cabinet in the Project Room at the David B. Smith Gallery

Adam Milner’s two exhibitions Desirable Objects and Cabinet will be on display simultaneously at the David B. Smith Gallery, 1543 Wazee Street, Denver, CO from the 16th of June until the 15th of July 2017