Amber Cobb lives and works in Denver, Colorado. Her work in sculpture explores material the way that my mind searches for words to describe them. Cobb is a bed scientist, of sorts, and her most recent installation, a sculpture of three parts called Tactics for Pleasure (2017), explores what we do in them. Beds are a recurring theme in Cobb’s work: one time, she cast a mattress in concrete and metal to make a sculpture called As I Adapt (2013), and earlier this year, Cobb was part of a show at Castle Marne, a fancy bed and breakfast in Denver, where she exhibited Tactics (previously, Work in Progress) atop a double bed inside the hotel’s most romantic Honeymoon Suite. The bed is made, used, and made again. 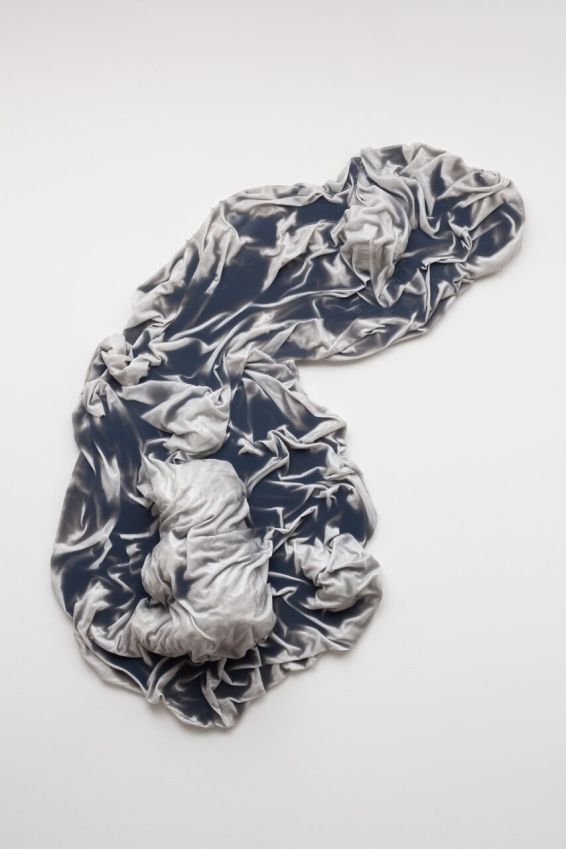 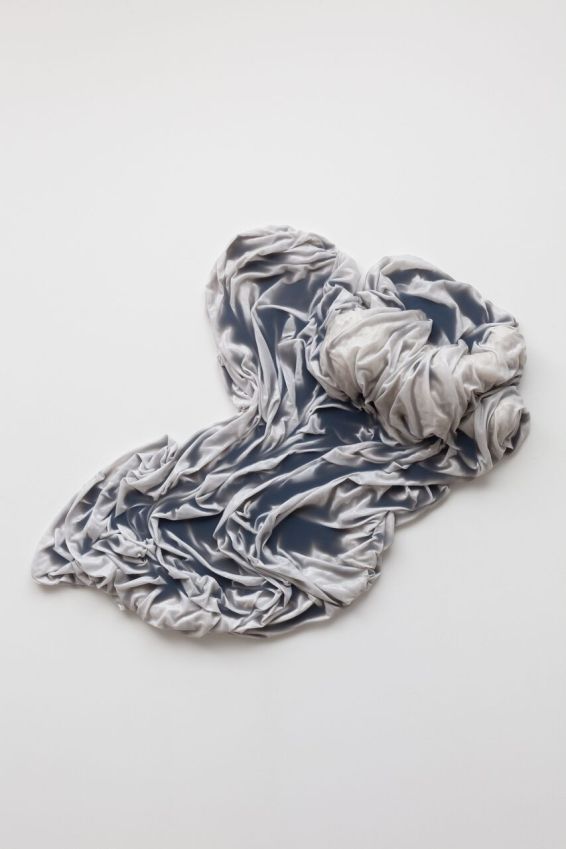 Cobb stripped the bed, in June, and introduced Tactics to one of the three walls at RULE Gallery, Denver. Cobb was one sixth of an all-woman show called Pretty Powerful, co-curated by Hilary Morris (RULE Gallery) and Cydney Wilkes (Leisure Gallery). The sheets are used not to swaddle but to suffocate teddy bears—soft things from younger times—by encasing toys and other things in sticky black silicone. The result of this process bears likeness to a stop-motion image of Loie Fuller dancing a Serpentine dance, but on the wall of 530 Sante Fe Drive, Denver, CO.

Sitting in an upright chair, you can imagine a bed but not feel it.  Donald Judd once wrote, ‘[r]ather than making a chair for people to sleep in or a machine to live in, it is better to make a bed’, a statement that is selfish in its suppositions. His preference of beds over all other things was part of a theory in practice. Judd saw human physiology as composed of three postures: upright, sitting and prone, with little or no intermediaries. With this in mind and Tactics in front, I am perplexed about posture and orientation. Am I sitting, standing or supine? The bed sheets are there, vertical rather than horizontal, looking like clouds or flowers rather than covers, and I am confused. I could be in any one of these three positions beginning with the letter s. My mind wanders to fetal teddy-bears covered beneath Cobb’s bed sheets and I’m reminded of Judd scribbling away in his freezing New York apartment, using his blanket as both a shield from the cold and roof.

Cobb’s installation wriggles: the silicone creates an illusion of slow motion and delay. From this perspective, the work’s sexuality is tightly controlled as the viewer is forbidden to reach any climactic moment. Other titles such as ‘Just because it’s wet doesn’t mean it likes it’ are more candid about the relevance of Cobb’s materials and their shiny, folded surfaces resembling genitalia. The installation at Rule Gallery, however, is more opaque. Similar to some of Cobb’s earlier work, it seems to explore ‘repressed anxiety’ but is focused on the dangers of places you choose to lie down and take rest rather than your desire to do so.

Elsewhere, Pretty Powerful muses on posture, stance and body language. Abigail Lucien’s ‘Feet Thinker’ is a short film that combines text with choreography and commentates on the way that women, or all people, are read and want to be read. She does this, and we do it too, through the feet.

I enjoy reading in bed, and I sometimes read about bed because, I agree with Cobb, it is a fascinating paradox of union and departure: a site of extreme comfort but intense anxiety, too. Beds are revelatory cushions, framed like canvas, with a power to excite. In her 1932 novel, Nightwood, Djuna Barnes created the fictional character Matthew O’Connor, who knows things about the night and sits elegantly in bed wearing makeup, going nowhere. The bed is a place of possibility and adventure: it’s where pillow talk happens.  In Barnes’ novel, Matthew is later violated by another character, Nora, who spies on him through a gap in his bedroom door and catches glimpse of his night-time visage. Secret things are revealed in bed, passed sister to sister, lover to lover, because it is a perceived island of security. Pillow talk is silly, open and sometimes confessional. Bed is a literal Utopia that thwarts the everyday. So, invading somebody’s bed, without invitation, is damaging: it disrupts a space designated for relaxing, loving, free-associative thoughts.

Art galleries send me to my bedroom, sometimes. I feel a sense of excitement similar to the surge of teenage enthusiasm that attached Blu-Tack to the backs of photographs, and hung a poster that said ‘Elvis sleeps here’ above a much resented single bed. Cobb’s sheets, and their reference to stickiness, glue and attachment, remind me of this too.  Her sculptures pick up dust and collect debris, often involuntarily. The silicone is a syrup that asks you to touch it, but you don’t because that’s not allowed in galleries or museums.

In earlier work, I’m thinking of the mattress titled As I Adapt (2013), Cobb explained her affection towards concrete and, in particular, its absorbent qualities. Conversely, John Chamberlain, one of Judd’s friends, became infatuated by foam. In the mid-eighties, he created a mouth-like cushion called Cradle (1985), similar to the enormous couch sitting in the first room of the Chamberlain Building, Marfa, TX. You can climb on this sponge-y mass and watch movies, such as The Secret Life of Hernando Cortez written and directed by the artist himself. You’re invited to relax and take break within a building once bent on the production of mohair and wool. The muslin covering the couch is there to protect the Urethane foam which, like a vampire, withers and dies in sunlight. Visitors protect the foam by sitting on it. Cobb’s mattress is significantly less inviting. It absorbs but is hardened, frozen, and monumental. It has engulfed the things around it, and those odd parts become and make the artwork. 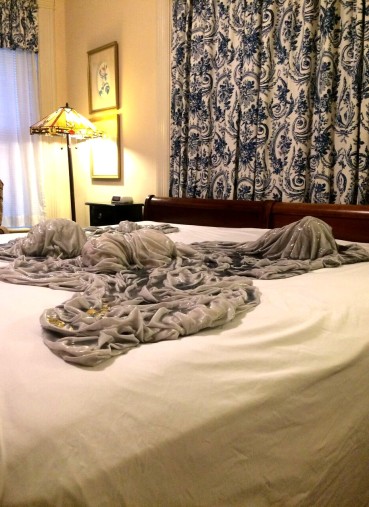 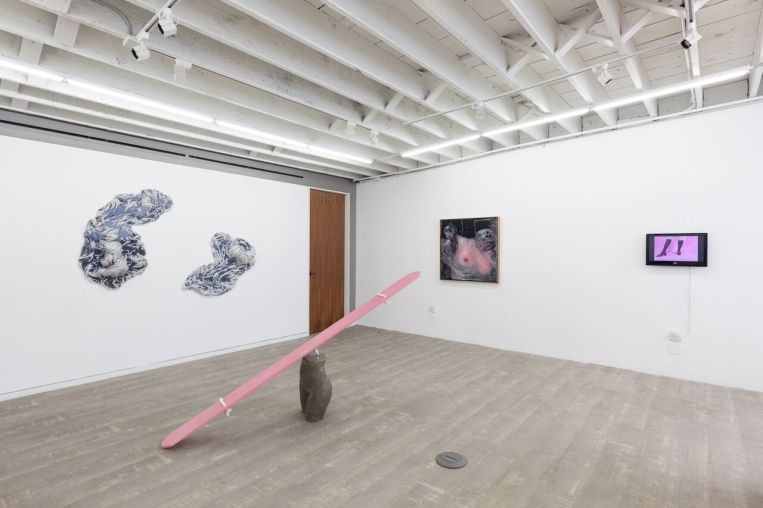 There is something about Cobb’s installation that makes me feel as though I’m on the ceiling of RULE Gallery, or distinctly not in bed. Tactics is an uncomfortable sight because it suffocates its sleeper, and threatens to keep expanding. Cobb decided to hang two parts of the sculpture in Rule, whereas before it lay on top of the love nest at Castle Marne. Its orientation makes the sculpture a skin that has been shed, rather than a layer still joined to a body. Judd’s furniture is characteristically uncomfortable: his ‘straight’ chairs are for writing or eating, and beds for sleeping. Cobb’s stripped bed is uncomfortable because it is not a recliner but the indentation you leave behind. It’s representative of the thing that happened in bed, and was supposed to be kept secret.

Amber Cobb is a Colorado based artist, living and working in the Denver area. In 2011 she received her M.F.A. in Sculpture from the University of Colorado at Boulder.  Cobb has a diverse body of work that explores the duality of attraction and the abject, and the pieces in Pretty Powerful extend her exploration to the primal and sensual nature of sexuality and intimacy.  Using materials that relate to skin: remnants of bedding, sheets, pillows, and stuffed animals, Cobb captures intimate movements and coats them in black silicone.  Frozen in the moment, the dishevelled bedding looks both wet yet firm and the resultant contradictions highlight her underlying themes.